What do you need to know about the home inspection part of your home buying or selling experience?

The most important thing that I have found is communication between those wanting to buy and or sell real estate and their agent.

Without everyone understanding each other you may as well close up shop and go home.

Before the current level of technology where agents are doing their best to avoid talking to their clients in person or on the phone, we had to talk face to face.

I know a lot of our clients still very much appreciate the face to face with the Santa Clarita home experts.

Some would rather deal on email and text - that's just fine. However, at least for now, that is the minority.

I produce videos such as this one that talks about the various parts of the home buying process. Not to I can avoid the conversation, but add to my creditability. Remember those people that I spoke about who like to interact on a less personal level? This video's that I produce help them understand the process.

If they have questions pertaining to the content, then it gives them a platform from which to ask.

I'm Connor - please watch the video. The transcription below was conducted by a computer program at the Temi website. It's not super accurate, watching the video will give you your best rendition.

Finally, if you are an audio type, I have posted this show on our Santa Clarita home experts channel allover our podcasting networks. iTunes, Stitcher and also on TuneIn. Check them out.

Good day to everybody. I'm Connor MacGyver and I'm going to give you an awesome tip with regard to home inspections. That part of the process within a particular real estate transaction, you're buying a house. I'm going to talk to you a little bit about the home inspection of what that means. I'm Connor MacGyver, Santa Clarita, home experts.com local agent here in Santa Clarita Valley, serving greater Los Angeles areas, and I want to be your realtor. So when you're ready, please look me up and I'll be happy to be there. You can go to Santa Clarita, home experts.com let's talk about the home inspection portion of the real estate transaction. Typically it's going to happen pretty quickly after you find that property. We write that offer. That seller accepts the offer. There might be some back and forth a little bit as far as negotiation. Everybody loves to negotiate, so it might be some back and forth and all of a sudden now you're officially in escrow.

So one of the next steps that have to happen is going to be the home inspection because you really want to see what you're buying. You want to see it deeper than maybe you can see it visually, so what you'll do is you'll select somebody from a list that we have and that home inspector will set up a date between you and getting access to the property via the sellers with the home inspector and myself. Yours truly will also be there. We'll go to the property on this particular date and typically the home inspector is going to start outside, but what they do and who they are, they're basically like a doctor. They're going to go around the house and they're going to pawn it, point out very obvious things, and they're also typically going to point out the things that aren't so obvious and especially the safety and health issues that the house might have.

If it has mold, they're going to bring that to your attention. There's a cracked roof tile or tiles. They're going to bring that to your attention. They're looking at the functional components of the house. Now, of course, some are more detailed than others. Some are going to put things like there are indentations in the carpet that are from furniture that was moved at some point. Cosmetic things, things that really aren't a big issue, but most of them are going to go much deeper than that. Some of them have special equipment, some of them can kind of see inside of walls looking for moisture under sinks within shower walls to see how the actual pan in the bathtub and under the shower, how that's holding up. If there are any leaks, they look very, very deep. They'll look at the plumbing, they'll run the systems that are activated and turned on.

Most home inspectors aren't going to activate a toilet, let's say it's shut off at the base so there's no water flow to it. Most of them are going to turn that on because they're not sure exactly what's happening and at that particular point if the seller happens to be around, which isn't the best-case scenario for the buyer because it's a little uncomfortable for the buyer and maybe for the seller, especially if the home inspector is walking around looking at things. A lot of times if they're a very active seller, they're going to be telling the home inspector how to do their job. I've seen it. It's a little ugly. So here's that tip I was talking about. When the sellers are there to have the debrief and at the very end when it's all over, usually the home inspectors, the good ones are going to give you the highlights.

They're going to sit there with you and your agent. They're going to complete a written report with photographs and the issues that they saw when they went up in the attic, what they saw had the underside of the roof. Look, they're going to do all of that fancy stuff. But again, one of the things that they're going to do is they have this debrief that I talked about. If the sellers happened to be there and you now are debriefing with the seller there and the home inspector says, well, the fireplace flue is closed and doesn't work, isn't functioning or whatever. The seller typically will go try to fix it or take it upon themselves to say that's not correct. You're being inaccurate, and then sometimes we have an ugly verbal exchange. I don't like ugly verbal exchanges, so being in the business since 1998 over time we have learned, we don't discuss the debrief portion of the home inspection in front of the seller.

No disrespect intended because what's going to happen is after we debrief, there's going to be a written report prepared and if the buyer agrees that report can be shared with this seller when we do a request for repairs if that's what we think needs to happen and be done in that transaction. That's the step after the home inspection or maybe the home inspector said, you know, there's this issue and this issue. Maybe there were some issues with the roof that went beyond their ability. So they're going to say, Hey, Connor, uh, I'm going to recommend to your buyer that they have a home, a roof inspector actually go out and look at the underside of the roof to see what these issues arose from. Is the roof leaking? Is the paper torn? Is it an easy fix? Does it need to reroof? All of those sorts of things. So all of a specter is also going to recommend other service providers if in fact what they're looking at goes beyond their scope, their intelligence certifications allow for it and such. I'm Connor MacGyver a little bit more than you want to know about home inspections, but I'm here Santa Creta, home experts.com when you're ready, remember Connor with honor, we'll talk to you soon. Thanks for watching it.

Here is a graphic depicting the past 4 years of our absorption rate. 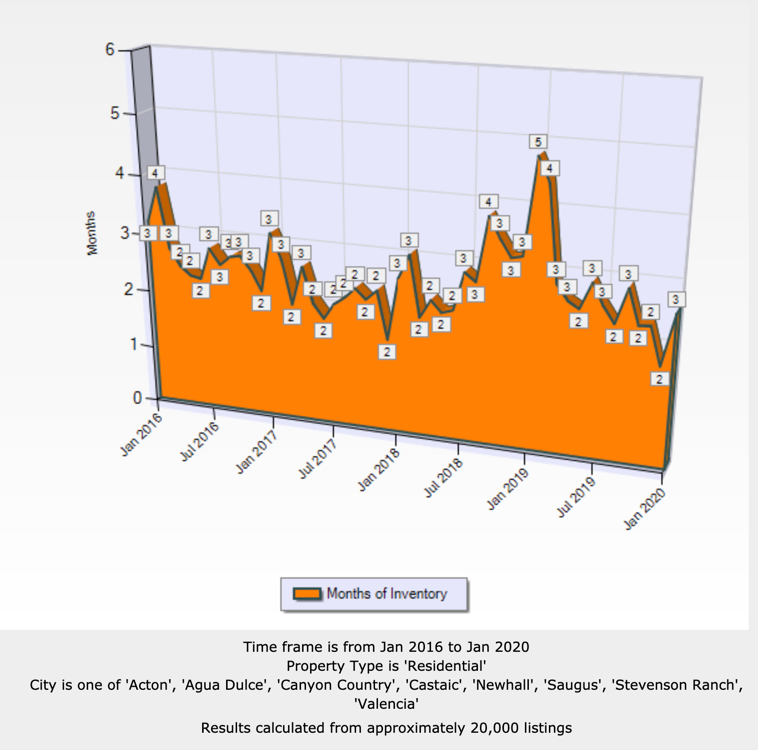 I will help you find a place that you'll LOVE: